Obama said the team traveled a long road to success. In 2011,the team made it to the NBA finals,only to come up short against the Dallas Mavericks in Game 6 of the series

“But when you fall,the real test is whether you can ignore the naysayers,pick yourself up,and come back stronger,” Obama said. “And that’s true in basketball,but it’s also true in life. That’s exactly what these guys did.” 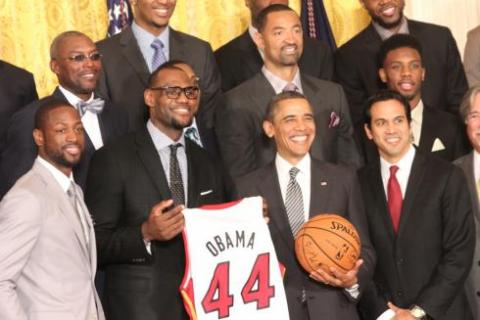 “So that team mentality with everybody doing their part is what finally put the Heat over the top,” he said.

Click on photo to enlarge or download: Lebron James presents an autographed basketball to President Barack Obama.Obama praised members of the team for maintaining fatherly roles.

“And one of the things I’m proudest of is that they take their roles as fathers seriously,” Obama said. “And for all the young out there who are looking up to them all the time,for them to see somebody who cares about their kids,and is there for them day in and day out,that’s a good message to send.”

Erik Spoelstra,head coach of the Miami Heat,said the team is happy,humbled and honored to be at the White House.

“We actually hope that this team serves as an inspiration to the nation of what a group can do when you come together and sacrifice your egos for a greater goal,” he said.

James presented a basketball autographed by members of the team to the president,while Wade gave him a No. 44 Miami Heat jersey.

Starting Today, It’s Illegal to Unlock Your Cellphone
Why combat role for US women could reverberate worldwide

Tips for Getting a Loan…