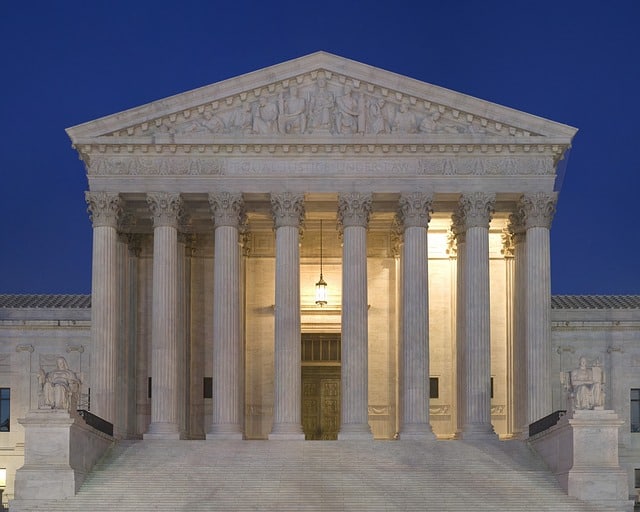 (AXcess News) Washington – The US Supreme Court grappled on Tuesday with a case testing whether officials in Florida went too far when they demanded that a landowner seeking a development permit set aside 11 of his 14.9 acres for wetlands conservation and fund improvements on a separate state-owned tract several miles away.

Public officials made clear that both concessions were necessary to receive a development permit.

Landowner Coy Koontz agreed to set aside 11 acres of his land for conservation, but he refused the additional requirement that he pay for road construction and other improvements on state-owned land several miles from his project site.

The proposed permit for Mr. Koontz’s tract east of Orlando was denied.

At issue in the case, Koontz v. St. Johns River Water Management District (11-1447), is whether Koontz is entitled to compensation as a result of what his lawyer says was an unconstitutional government “shakedown.”

Paul Beard of the Pacific Legal Foundation urged the high court to expand its property rights jurisprudence to make clear that landowners like Koontz who face coercive permitting requirements are entitled to receive fair compensation from the government.

Deputy Solicitor General Edwin Kneedler told the justices that if they agreed with Koontz and his lawyer it would constitute a “radical change” in how government regulatory programs operate.

“It is standard procedure when someone applies for a permit from the government, it is the permit applicant’s burden to establish that he complies with the regulatory program,” Mr. Kneedler said.

The approach advocated by Koontz and his lawyer would shift that burden to the government, he said.

The Fifth Amendment requires that the government provide “just compensation” for any taking of private property for public use.

That’s what Mr. Beard said happened to his client.

Several justices weren’t so sure.

Justice Ruth Bader Ginsburg said state officials offered Koontz a range of potential mitigation measures – not just one or two. She said one proposed option was to reduce the size of the development site.

“So it was not take it or leave it,” she said of the state’s posture.

Justice Antonin Scalia wanted to know precisely what was taken from Koontz. “Here there is nothing that happened. The permit was denied. I can’t see where there is a taking [of property for public use],” he said. “Nothing was taken.”

Beard said the taking was the government requirement that Koontz spend money to improve state-owned land as a condition to obtain a development permit for his own land.

Estimates of the potential cost of the required improvements on the state land range from $10,000 to $150,000.

Chief Justice John Roberts asked whether property owners would have a claim under the Takings Clause if the government required them to pay for a new football stadium as a condition for further development of their own land.

“One of the things the federal provision,the Takings Clause,is designed to prevent property owners from having to bear the costs that should be borne by the people as a whole,” Chief Justice Roberts said.

“There is no reason that a particular landowner should have to pay for [a] football stadium simply because he owns property. The Takings Clause was designed to make sure that those exactions are not imposed on property owners but spread more evenly across the citizens who benefit from it,” he said.

Paul Wolfson,a lawyer for Water Management District replied that the football stadium hypothetical example might trigger an equal protection challenge by landowners,but not a case under the Takings Clause.

He said the required expenditure of money as part of a regulatory scheme did not amount to a “taking” of property by the government.

The Florida land dispute dates from 1994 when Koontz’s father filed a lawsuit charging that the required off-site mitigation work amounted to a “taking” of his property without just compensation.

He cited two prior Supreme Court decisions – Nollan v. California Coastal Commission and Dolan v. City of Tigard. The cases require that there be a relationship between any mandated mitigation work and the effect of the proposed development project.

A state judge and a state appeals court agreed with Koontz and ordered the water district to pay compensation of $327,500.

Water Management District officials appealed to the Florida Supreme Court,arguing that the Nollan and Dolan cases do not apply to mitigation discussed before permit approval. Water District lawyers also argued that the cases apply only to exactions involving land,not to mitigation requiring the spending of money.

A decision is expected in the case by June.