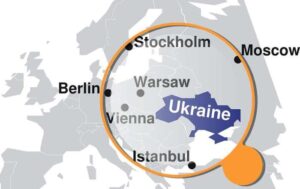 Today, Yahoo News featured a story by CBS News national security correspondent David Martin, who is seen in the video report claiming that “intelligence says” that Russian troops have received orders now to proceed with the invasion.

However, Martin does not back up the claim with any evidence. He also does not specifically cite what intelligence agency claimed it and on what grounds, nor does he explain what makes Biden keep repeating the Russian invasion story. The political tension of the separatist groups against Ukrainian government comes as a completely different story and Russian Ambassador to the United States, Anatoly Antonov, reiterated today Russia’s position—no invasion plans for Ukraine.

Ukraine itself has denied more than once the Russian invasion narrative drummed up by the mainstream media in the west. Ukraine’s Defense Minister Alexey Reznikov Ukrainian 1+1 broadcaster today (Sunday) that speculation of Russian invasion against Ukraine was inappropriate. Russia Today reported:

Reznikov told the Ukrainian 1+1 broadcaster on Sunday that at this moment “no strike group has been formed” by Russia on Ukraine’s borders.

Despite the flurry of anti-Russian statements in the media, the Biden administration seems to lack coherence and unity of thought on the anticipated Russian invasion in their narrative. Last week, Biden did not accept an invitation from Ukrainian President Vladimir Zelensky to visit Ukraine and meet him. Instead, he sent Kamala Harris to meet Zelensky. On the one hand, it portrayed, yet again, Biden’s weak and failing status as a president on a political ventilator. On the other hand, Harris sounded confused and lacking in confidence on meeting Zelensky. Fox News reported that Harris claimed imposing economic sanctions against Russia would deter Putin from invading Russia.

However the CBS story published today cites U.S. Secretary of State Antony Blinken telling that slapping Russia with sanctions now would mean the loss of the “deterrent effect.”

“Once you trigger the sanctions, you lose the deterrent effect,” he said. “As long as there is still even a minute’s worth of time in which we can deter and prevent a war, we’re going to try to uses it.”

Put together, the thoughts of the Biden-Harris-Blinken trio fail to fall in together as a coherent political position on the presumed Russian invasion against Ukraine.

‘It Came Upon a Midnight Clear’ Teen Movie Sets January 22