This past September, former President Barack Obama broke ground at the site of his future presidential center in Chicago – a project that is potentially devastating to the environment of the area. For this reason, it has been fought with lawsuits since its beginning. AxcessNews presents an interview with an organization that has battled the construction of the Obama Presidential Center and continues to do so.

Michael Rachlis is co-counsel to the Protect Our Parks (POP) and its co-plaintiffs in the ongoing lawsuit that seeks compliance from the various federal and state laws and prevents the destruction of Jackson Park. Rachlis is also a partner at the law firm Rachlis Duff & Peel, LLC in Chicago, IL, specializing in complex commercial litigation, including land use and preservation issues. Rachlis is co-counsel with preeminent legal scholar Richard A. Epstein. Rachlis and Epstein represented other litigants to protect Soldier Field, public trust property, and the current home for the Chicago Bears football team nearly two decades ago. They wrote the opinion editorial in the Chicago Tribune regarding the current threat of the Bears leaving Soldiers Field to build a new stadium in Arlington Heights, IL.

AxcessNews: For the past five years, your organization has legally battled the construction of the Obama Presidential Center at Chicago’s Jackson Park, Chicago. But the Obamas recently broke ground for the center. Have they won in the court?

POP: At this stage of the litigation, the Defendants certainly have had some victories regarding the efforts to halt construction. While these decisions, so far, have been in their favor, they are interlocutory and are not final decisions on the merits. Accordingly, they have not won the case, and this is not a done deal.

The Plaintiffs still have the main complaint filed in April to present the full set of evidence and arguments and are seeking to add additional state law claims associated with alleged violations of financial conditions required under an agreement between the Obama Foundation and the city of Chicago. All of this is in addition to waiting for a decision from the three-judge panel, which heard oral arguments on November 30, 2021, regarding their appeal on the preliminary injunction in the US Court of Appeals for the Seventh Circuit.

AxcessNews: The Obama Foundation is said to have engaged in land grab to get this center built at the Jackson Park. Tell us a little about it.

POP: The City’s breach of the public trust doctrine is evidenced by the City’s deal with the Obama Foundation that includes the transfer of nearly 20 prime acres of historic parkland established by a legislative grant for a private development, which will be used and controlled by the Obama Foundation. The City gave irreplaceable public parkland from a historic park along Chicago’s lakefront to a private entity for $10.00 (ten dollars) for 99 years for the primary benefit and purposes of the private entity, not for the primary benefit of the community.

AxcessNews: How serious is the environmental and ecological damage caused by the Obama Presidential Center?

We understand that there are significant environmental and public health concerns that will be detrimentally impacted through the current plans for the development of the Obama Presidential Center. The magnitude is yet to be completely understood and studied, given the Defendants’ refusal to develop an environmental statement.

Northwestern University professor, Dr. Teresa Horton, noted the significant environmental and public health implications in her independent amicus brief, for which she sought leave to present to the appellate court in support of the Plaintiffs’ position on their appeal of the denial of their preliminary injunction request.

Here is an excerpt from Dr. Horton’s submission concerning the impact of the removal of mature trees: 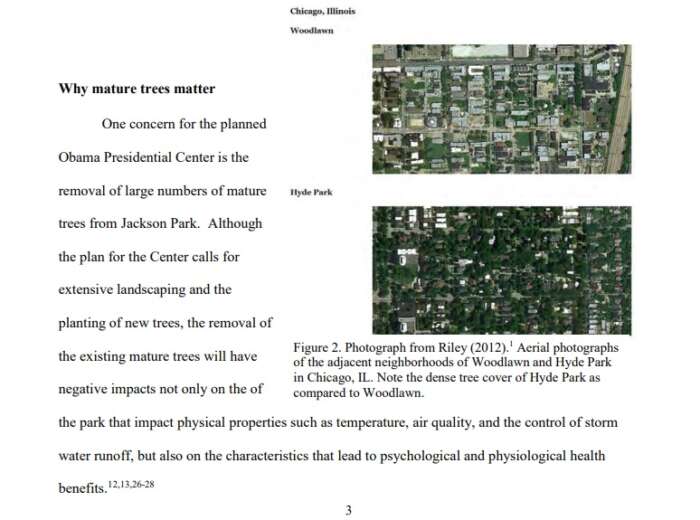 Migratory birds will be significantly impacted by losing nesting areas, and the completed construction will create obstacles for migratory birds that use the Mississippi flyway.

The physical changes to the park itself will destroy Frederic Law Olmsted’s thoughtful design, which recognized that parks and landscapes are essential to the ecological health of the planet. This point was raised by the National Association of Olmsted Parks in their filing before the US Court of Appeals for the Seventh Circuit to support the Plaintiffs’ appeal. Jackson Park is positioned between Lake Michigan and dense urban areas to the north, east, and west.

As temperatures increase, the park is an antidote to heat islands and degraded air that challenge human health and productivity. Jackson Park’s design addresses periodic flooding through the creative use of plant masses with native dune grasses, sages, and sedges. These plants protect the park edges when flooded during storms. By helping soak up water from the sky and the lake, the park operates like a green sponge helping to address the inevitable challenges of storms and water runoff, now only worsened by climate change. The construction will undermine and weaken this system.

No, unfortunately, the major environmental groups have been largely silent to this point. There is still time, however, for those groups to participate.

Of note, three organizations and an academic attempted to file amicus briefs (unsuccessfully) supporting the Plaintiffs’ arguments. These groups outline some of the core issues at stake from an environmental, public health, and historical perspective. Some of their views are included in response to the previous question.

AxcessNews: What do you think are the stakes involved in the construction of this presidential center? Could this project be designed in a better way?

POP: The city of Chicago, Chicago Park District, Obama Foundation, and various federal agencies that handled the mandatory reviews did so with disregard for the benefits of the green space of Jackson Park and without consideration of the significant environmental, historical, and community-based concerns brought to the fore in this lawsuit. Even more egregious is the blatant disregard for Jackson Park’s destruction and the negative environmental and public health impacts such construction would have.

What’s more, there is no specific or unique benefit to placing the presidential center in Jackson Park to the residents on the South Side versus its placement in a different South Side location. Unfortunately, feasible and prudent alternatives to the Jackson Park location were not thoroughly or adequately considered consistent with the requirements of federal environmental, historical, and transportation regulations and statutes.

When you look at any other major redevelopment or economic development projects, usually those projects begin with an anchor, and the redevelopment builds around the anchor. For this plan, the development around Jackson Park already exists – the Obama Presidential Center would not be the anchor.

Protect Our Parks publicly noted repeatedly that the community and the Obama Foundation would find further benefits by exploring another location on the South Side – we have advocated for the area close to Washington Park.

South Side resident and architect Grahm Balkany designed a plan that we think is worthy of exploration. Here is a link to his website.

AxcessNews: Has your organization or its legal team been threatened or intimidated by anyone in any way since it decided to take the presidential center case to the court?

POP: No. The most disappointing part of this discussion is that people accuse these efforts of being racially or politically motivated. But that could not be farther from reality. Let us be clear here; all the Plaintiffs want and support the Obama Presidential Center on the South Side.

The concerns are the location, the process, and the violation of the public trust. Broadly speaking, the Plaintiffs’ view is that there is no reason to destroy the environment, a public park (which is also a historic and vital Olmsted landscape), create private development on the lakefront, and endanger public health to build the Obama Presidential Center.

These results emanated from a fundamentally flawed process where the City improperly delegated decision-making to the Foundation, and the federal agencies and City rubber-stamped those decisions. The local community can and should have both its robust and historic public park and a presidential center that honors the former president and first lady, allowing for the actual creation of economic development utilizing the existing transportation grid and vacant land for the benefit of the community.

AxcessNews: Are the people of Chicago aware of the damage the construction of the Obama Presidential Center? Have they shown any public rejection of or protests against this project?

POP: Yes, people are aware of the pending construction of the Obama Presidential Center. However, we are not sure if they understand the significance of the potential damage or feel they have a voice when the process appears predetermined.

There are organizations focused on affordable housing and the impact on issues of displacement of long-time residents who have been recently voicing concerns. We also believe that other individuals will begin to voice their opinion, particularly as the construction begins. For example, community members are directly impacted by severe traffic disruptions or agitated by the visual destruction of the park and historic landscape.

As construction moves forward, there will be greater awareness of why development projects of this scale must consider the full scope of the environmental issues and the real impacts – economic and otherwise – for the community. All of these interests necessarily require a hard look at alternative sites – none of which happened in the Obama Presidential Center construction project.

POP: Yes, but those who believe our engagement has political motivations either do not understand the core issues at stake or are ignoring those issues. For Protect Our Parks and the co-plaintiffs, the procedural and substantive issues raised are critical no matter who or what entity desires to build a private development in a historic public park that will ultimately destroy the public use of the park.

For updates, follow Protect Our Parks online at https://www.protectourparks.org/.

Dangers Everyone Should Be Aware Of

What are the Limitations of Kitchen or Home Appliance Insurance? Your Top Questions Answered

A Guide to Recycling Business Waste