When vaccine-preaching Canadian doctor, Sohrab Lutchmedial, taunted the unvaccinated with an unceremonial funeral over dying of COVID, he had no idea what was coming his way. The Canadian doctor died two weeks after taking his booster shot against COVIDd-19.

Health Impact News reported on November 10 that Sohrab Lutchmedial, a cardiologist and a hockey coach in New Brunswick, Canada, spent much of the year 2021 bashing the unvaccinated on social media. In July, the vocal Canadian doctor replied to the tweet of a like-minded doctor pushing for vaccine passports with the caustic comment: “For those that won’t get the shot for selfish reasons – whatever – I won’t cry at their funeral.” 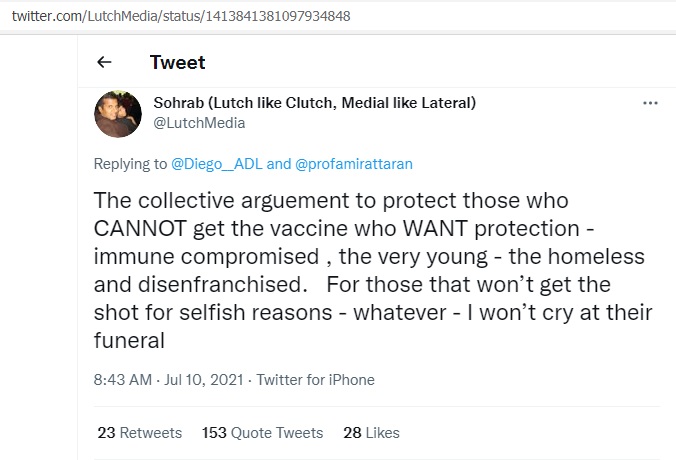 On October 9, Dr. Lutchmedial apparently replied to another pro-vaccine tweet and said he would like to punch those who convince people not to get vaccinated. The screenshot of his reply was included in the story. And while the original tweet remains on Twitter, Dr. Lutchmedial’s reply seems to have been deleted.

On November 8, Dr. Lutchmedial reportedly died in his sleep, two weeks after he took the booster shot on October 24. There is no reason reported for his sudden death, which came as a shock to his family and friends, according to The Gateway Pundit.

According to Canadian media, Dr. Lutchmedial’s friends, family and colleagues are in shock over his sudden death.

Following his death news, the Canadian doctor’s tweet taunting the unvaccinated by reminding them of their death and his refusal to cry at their funeral was heavily trolled by the unvaxxed. Multiple tweets replied with “well that didn’t age well” while some satirically said he kept his promise because now he won’t be crying at the funeral of the unvaccinated who are still alive and healthy as a horse.

Last month, official data from Public Health England showed that the number of fully vaccinated people dying of COVID’s Delta variant in the UK in 2021 was more than twice the number of unvaccinated dying of it.

‘It Came Upon a Midnight Clear’ Teen Movie Sets January 22